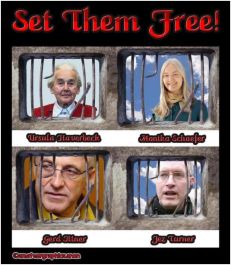 END_OF_DOCUMENT_TOKEN_TO_BE_REPLACED

Derbyshire police have dropped the three possible pending charges relating to my arrest on suspicion of harassment and incitement last November (see my previous posts). All that’s left now are two malicious communications charges, for sharing the London Forum video of September’s Grosvenor Hotel performance, which the CPS thus far has failed to serve on me properly by (conveniently?) not paying postage.

Several of my contacts with knowledge of English law and court proceedings have told me that costs so far would already amount to tens of thousands of pounds. If I go to trial in July and lose, I will appeal which will carry the total into the hundreds of thousands – all at the expense of UK taxpayers.

As well as the police and CPS investigations, there have already been three hearings at Westminster Magistrates Court in front of three different judges. Chief Magistrate Baroness Arbuthnot was obliged to quietly recuse herself after it was revealed she’d been on an all-expenses-paid trip to Israel as part of a delegation with the Conservative Friends of Israel (CFI). Now that my case has been taken over from foreign lobbying group Campaign Against Antisemitism (CAA) by the Crown, the CPS have their top counter-terrorism lawyer on board as well as a big-shot barrister and we mustn’t forget the cost of police protection necessary to fend off  Jewish Defence League (JDL) thug protests outside court.

Asides a straggle of limpet-like gang-stalkers whose lives would no doubt be completely empty if they weren’t intent on trolling my every post on Gab or YouTube, the usual culprits are all uncharacteristically subdued. News of Derbyshire police having dropped all charges won’t be music to fishwives‘ ears, nor to those down at CAA head office.

After my trial was adjourned last month, I was supposed to receive a new charge sheet by first class post on March 25. When I opened the letter, it was a simple bail sheet and the above-mentioned charges are described as ‘cases’. April 3, I received notification from the local post office that they had an undelivered item which I could collect after paying £2. The next day, I went to the delivery office and saw that the item was in fact the charge sheet. The lady behind the desk said I was entitled to refuse because the sender had failed to stamp or frank the letter. Maybe my gang-stalkers need to have a whip-round in aid of CPS postal charges?

Therefore, I have still not been formally charged with any crime. The charges of malicious communications for sharing a video (not uploaded by me to YouTube) are confusing to say the least. No one is being forced to visit my blog and watch the video.  For the past five months, I have been effectively gagged, unable to share my thoughts on social media and unable to look for work: my computer is still with police and I have no idea when it will be returned. My trial is now adjourned and, depending on legal arguments to be heard in front of District Judge John Zani on June 23, is provisionally rescheduled for July 17.

Despite these inconveniences, I can count 12 successful performances this year so far.  In January, I was invited to perform with Italian tenor, Giuseppe Fallisi in Vichy on the occasion of Professor Faurisson’s 88th birthday. I appeared again at the London Forum in February in the illustrious company of David Irving, David Shayler and Vincent Reynouard. A week later, I flew to Toronto for a nine-day, eight-city tour of Canada sponsored by Paul Fromm’s Canadian Association For Freedom of Expression (CAFE) and last month I was a speaker at the Forum de la Nation in Lyon, France where Fallisi and I again gave a performance of his compositions based on poems by Rimbaud, Verlaine and Baudelaire.

My gagging order prevented me from speaking openly about these events, but it did not prevent the Canadian press from appeasing various Jewish organisations which had the gall to associate my tour with a series of bomb threats sent to synagogues, later found to have been the work of an Israeli Jew. My parents also received unwelcome attention from the press when BBC Religious Affairs Correspondent, Martin Bashir, tried and failed to doorstep me. I had already declined to make any comment to the past interviewer of Princess Diana and Michael Jackson: it’s not as if the BBC is suddenly going to start reporting fairly about ‘Holocaust’ revisionism.

Following last month’s adjournment, I did however accept several alternative media broadcasts which you can find on YouTube. I will leave links below as well as to my PayPal account and where to purchase a copy of my EP. Thanks to all my readers and supporters. Long live free speech.

Antisemitism Harassment Campaign and The Law with Alison Chabloz

PayPal – For those wishing to support me. Many thanks

Songs of the Shoah