September 24, 2016, I was invited to present my songs of the Shoah to an audience of over 100 people for a meeting of the London Forum at the Grosvenor Hotel.

Vultures are looming again. Squawking and blustering on Twitter with the thought of spilling yet more of our children’s blood in another pointless war.

They’re also after my blood. Or at least my silence. Today, a troop of tribal cyberterrorists is plotting to attack a local church’s special carol service : 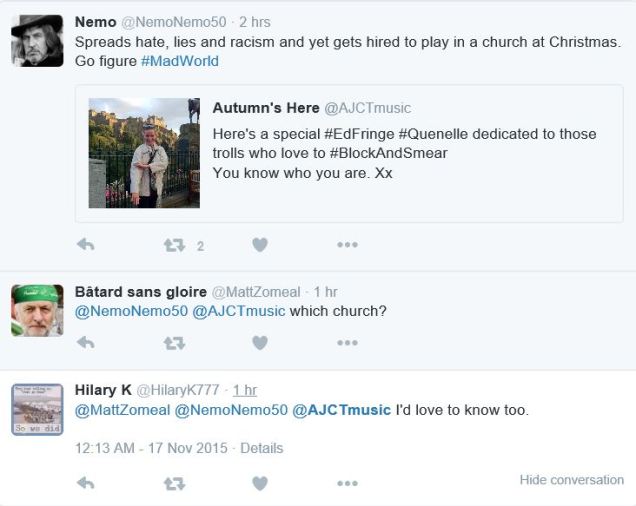 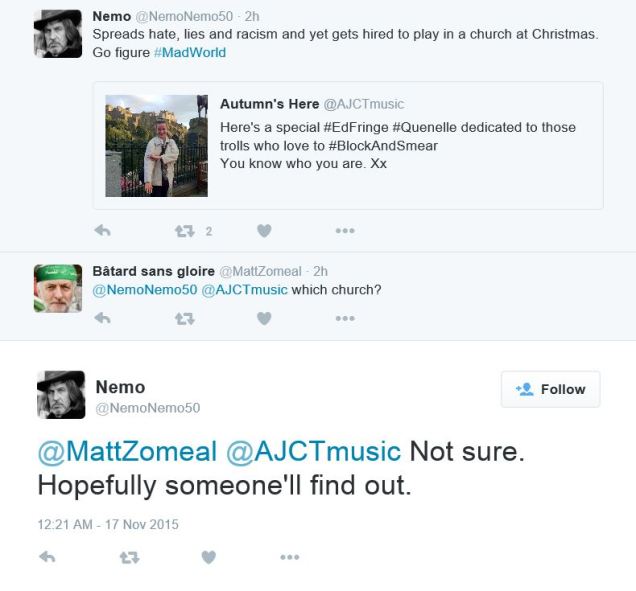 Hopefully someone will find out?  Seemingly, the above trio of Zionazis are gnashing their teeth at the idea of ruining the hard work of everyone involved – at Christmas! The music will be provided by myself and two fellow musos, there will be a candlelit procession for the kids and and, later on, supper and dancing with music again provided by yours truly.

Three local church leaders are involved. After knowing each other for over a year now, I’m sure if I explained my situation to my friend the vicar he would be willing to write a character reference, as has been also suggested by others who’ve known me since my university days.

After writing yesterday about losing one contract owing to the despicable antics of these vultures I feel it’s important to reiterate the fact that AIDA, the German cruise company which fired me in the most appalling and unfair circumstances, reached their decision based on the word of a non-Jewish Internet troll claiming to represent all Jews. Ironic, no?

@MattZomeal aka Simon Cobbs, founder of Sussex Friends of Israel (who I’ve written about here) and his cyberbullying pals are all associates of this very same, non-Jewish Internet troll Ambrosine Chetrit and are therefore in breach of the police-worded, recorded delivery cease and desist letter which Chetrit received last year and signed for herself.

Also in reference to yesterday’s blog, it would appear that Jasna Badzak is seeking a restraining order against me for pointing out her lies and hypocrisy on Twitter.  I wish her good luck with that.

As well, two peace-keeping missions have been set up to try and mediate – although I haven’t seen either mediator trying to negotiate publicly with Badzak who continues to isolate herself, mainly thanks to her own stubborness.

One of these peace-keeping emissaries is Jason Schumann aka @DebatingCulture who earned himself a well-deserved block :

By playing the role of peace-emissery, Shumann is merely indulging in some much-needed image-grooming.  Perhaps Schumann needs to gracefully withdraw once and for all before I decide to root around in my archives for those emails concerning BDS, a lawyer named Simmons and Chetrit ? – Emails that arrived with strict instructions not to show to anyone. Or how about the song I was commissioned to write, set to those lyrics?

Schumann is wasting his time. As are the vultures. Their attempts to silence me, their abuse and harassment is plain for all to see.  If they really want to silence me then they’re going to have to kill me.

This is my jihad.

A few minutes ago my attention was drawn to an LBC phone-in audio of a certain ‘Nicola from Hertfordshire’ stating ‘Every Muslim is guilty by association‘ for the recent attacks in Paris.

During her extraordinary call, ‘Nicola’ claims to be a Catholic, then seems to contradict herself.  It’s clear she hates Muslims.

Unastonishingly, ‘Nicola’ sounds exactly like Ambrosine Chetrit (this despite a seemingly short-lived career doing voice-overs). If Chetrit managed to fool everyone into thinking she was Jewish – including AIDA, one of Germany’s largest employers – then why not also try to kid people into thinking she’s a Catholic? Although, it could also be true. And after this call we can be sure Chetrit is definitely not Jewish.

I’ll make sure to ask the vicar for his thoughts.