During my three-day appeal last February, the prosecution’s main argument regards the facts – i.e are my songs “grossly offensive” under S. 127 of the 2003 Communications Act – relied on Judge Charles Gray’s 2000 ruling in the Irving vs Lipstadt case. According to both James Mulholland QC and Judge Chris Hehir, Judge Gray’s ruling provided the appropriate benchmark by which to (a) define “Holocaust denial” and (b) prove that the Holocaust happened according to the standard narrative (six million Jews killed mostly in gas chambers as part of a pre-planned mass-extermination of Jews by the Nazis).

In response to the court’s decision to uphold my appeal, I wish to cite a passage from the end of Thomas Dalton’s Debating the Holocaust – A New Look At Both Sides that deals with Cambridge historian Richard Evans’s 2001 book Lying About Hitler. Evans acted as Lipstadt’s expert witness; his book describes his impressions of the case.

Dalton’s scathing treatment of Evans’s chapter on the Irving vs Lipstadt trial raises serious concerns not only regards Evans’s intellectual capabilities; Dalton’s appraisal also calls into question Judge Gray’s ruling and its consequences for further revisionist witch trials here in England. The passage comes at the very end of the book, in the Epilogue, on pages 293 to 294.

Dalton’s work is highly recommended reading. It can be found here where you can also download a free PDF “peek” preview. Here’s the relevant passage:

6. The anti-revisionist response is highly revealing

Since the year 2000, there have been only a few attempts by orthodox historians to respond directly to revisionist challenges. […]

END_OF_DOCUMENT_TOKEN_TO_BE_REPLACED

This post is the first of a series of three articles addressing the ongoing internecine campaign to oust me from British nationalism-revisionism.

After having blamed me for sabotaging Professor Robert Faurisson’s final conference in Shepperton and then holding me responsible for the 89-year old professor’s death the following day, the pitch coming from my detractors has suddenly shifted into trying to shame me into abandoning my appeal. Spin now also includes mental health smears that I would be “insane”.

Firstly, a brief word about the three signatories of the original Shepperton sabotage statement:

Michele Renouf is the same age as my mother. One regular London Forum attendee, also female, describes Renouf as the “self-appointed Secretary General of the UK Revisionist Closed Shop Union” – an apt appraisal.

In a recent email, former BNP leader Nick Griffin had this to say about Renouf’s involvement in the smear campaign against me:

“I think that the motivation of Renouf is probably simple personal jealousy. She spent several years as the poster-girl of the clique of elderly single men who make up the most visible and noisy section of the ‘far-right’ in Britain, then you came along, younger and with much more ability. No more explanation needed.”

Not wishing to further embarrass Renouf, I shan’t be publishing similar views from other correspondents. However, more information on Renouf is included below.

Veteran nationalist Richard Edmonds is also the same age as my mother. When giving speeches, Edmonds likes to boast about having managed to survive in nationalist politics for so long a) because he’s never made a fool of himself over women and b) because he never mentions people’s names. (Ironically, when former BNP organiser Bob Gertner was also facing internal accusations of working for the enemy, Edmonds supported him on grounds of there being no evidence).

As Edmonds is the person (patsy?) to insist I should abandon my appeal – implying also that I should grovel to the opposition rather than fight back – he might like to take note of legal proceedings during the early 2000s against the late Gaston-Armand Amaudruz, whose appeal led to the Swiss Federal Tribunal reducing his prison sentence for historical revisionism from 15 months to just three.

(N.B. Guillaume/William Nichols was Prof Faurisson’s private secretary for many years. For unknown reasons he gave his approval to the published statement but didn’t actually go as far as signing his own name. Since then, he’s included me in several round-robin emails and even replied to Edmonds’ scaremongering, insisting that I am “sincere, albeit slightly insane”).

Peter Rushton is two years younger than me. Perhaps the fact that he spends most of his time in the company of seniors has caused him to look the same age as my mother? (NB My mother’s stylish dress sense and constant temperament gives her the edge over my detractors any day).

When Rushton was proscribed from the BNP in 2002 following multiple allegations of dubious activity, his written response included the following gem:

“If you are interested in finding out the truth of an allegation, the most obvious thing to do is to put the allegation to the person concerned. ‘Evidence’ is not really evidence at all until it has been rigorously tested.

“Griffin and Lecomber, characteristically, preferred not to test any of their ‘evidence’. I and many others were first told that there could be no mention, let alone discussion, of any of the charges, let alone the evidence!”

Crucially, it was Renouf herself who in 2017 told me that Rushton had first made contact with her after he had created two promotional websites: Telling Films and Jailing Opinions.

Like Griffin, historian and investigative journalist Larry O’Hara of Notes From The Borderland is convinced that Rushton, aka Captain Hook (aka Andy Ritchie aka Leo Clitheroe), is a state asset:

[…] Rushton is a long-term Searchlight/state mole, and as the former’s star is waning, it is entirely plausible he has hooked up with HNH [Hope Not Hate] too. In 2002 the Nick Griffin-led BNP expelled him because of cumulative evidence […]. To quote (for the first time anywhere) a contemporary (22/10/02) intelligence report by one of Rushton’s handlers:

“has been at the centre of an ongoing war between various factions within and outside of the BNP. He appears to have Tyndall on side and has set up a NWBNP site to put the case of his supporters. He has also on my advice gone down the Data Protection path to ask to see what they hold on him……He has some heavy people behind him. It could run and run”.

It certainly has ‘run and run’, but maybe has now finally run its course. […] Rather than embarrass Rushton further I merely say this: is it not time, honestly, that Captain slung his Hook?

The ridiculousness of the signatories’ claims against me speaks for itself, as does Edmonds’ latest scaremongering attempt to persuade me to abandon my appeal. Indeed, Rushton’s use of bold text in the H&D online edition of Edmonds’ piece further confirms that he – Rushton – was the instigator of the “strategy” angle all along (= my songs would be a disaster for “real” revisionists) and therefore also the main culprit behind the conspiracy to oust me from British nationalism-revisionism.

See also Rushton’s comment in the new H&D print edition: this fake nationalist doesn’t even have the cojones to mention my name. If Rushton and his editor Mark Cotterill think that intelligent people are likely to believe such garbage, then perhaps it’s worth noting the following “biography” written by Rushton on one of the websites he dedicated to Renouf just over a decade ago:

The only verifiable facts of the above are Renouf’s Australian origins, her move to London in 1970, ballet classes (her mother ran a ballet school) and her marriages – although “happy” would seem to somewhat contradict Renouf’s decision to run off and marry a billionaire. Maybe “happy” simply wasn’t enough and she was in search of wealth and a title as well? Renouf’s only bonafide diploma is her teaching certificate from Australia. The rest is bogus, including claims of Russian nobility and most likely the ballerina pic too.

Despite hard evidence in black and white that both Rushton and Renouf have lied (see photos below) and are still lying through their teeth in order to discredit and defame me, a number of patriots still seem in awe of them. Oh, and before I forget, there is apparently no public record of Rushton ever having obtained a first class degree in History from Oxford. Again according to O’Hara, it was Gerry Gable’s Searchlight that originally published this story years ago. Furthermore, Rushton’s defence witness statement in my original trial was submitted without my prior knowledge. His offering – a few photocopied pages of Finkelstein’s Holocaust Industry along with various links from The Guardian and elsewhere – arrived in my inbox as part of my lawyer’s submission to the court. 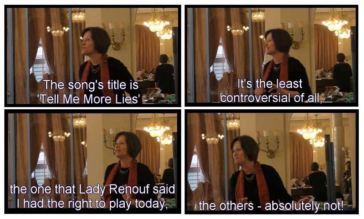 Above: Rushton’s and Renouf’s claims regards my Vichy 2017 performance were proven to be false after a video of the event was finally released May 2018.

Returning to the Shepperton debacle, it is now almost impossible to reach any other conclusion: Rushton and Renouf wanted me removed from revisionist circles long before the Shepperton conference actually took place. Several sources who attended the conference have confirmed that Matthew Collins of Hope Not Hate taking credit for following a group of attendees from Waterloo is bunkum. HNH’s informant had to be one of the party and all trails lead back to the organisers themselves, to an invited guest, or to a combination of both.

Perhaps patriots reading this will now begin to understand why UK nationalist politics have repeatedly failed to achieve anything of consequence? As for my appeal, if Rushton, Renouf, Edmonds, et al., truly believe that I should forego my rights and grovel to the opposition, thanking them for the “leniency” of my sentence, then they are hugely mistaken.

Looking back over the past 12 months, it’s hard to describe my year as being anything other than eventful. Thank you to all my followers, readers and donors – your support has enabled me to continue the fight and remain strong in the face of ever-increasing adversity.

In the past, – asides those contracts on cruise ships where I entertained live audiences daily – my musical performances were more often than not part of some folk gathering or open mic session. Of course, most artists desire a live audience and such events were always enjoyable, giving me the opportunity to meet other musicians playing the local circuit in the North West and Derbyshire.

There’s no denying that I sometimes feel great sadness about having lost this part of my life. Many of those closest to me now are understandably concerned for my safety and believe that appearing at open mics elsewhere is simply not worth the risk.