Commitment and sacrifice are the same thing. Committing oneself to the revisionist cause is perforce a self-sacrificial act, especially in countries where expression of doubt or non-belief of proven lies is unlawful. In the UK, however, revisionism is not unlawful, despite wishful thinking on the part of many of my accusers.

To recapitulate: militant Zionist NGO, Campaign Against Antisemitism, CAA, brought a private prosecution against me for a video I had originally uploaded outside English jurisdiction. After taking over and discontinuing CAA’s private prosecution, the Crown Prosecution Service, CPS, then brought two pairs of charges against me for a video containing two of my songs, (((Survivors))) and Nemo’s Antisemitic Universe in a video of a live performance of my show, Tell Me More Lies, originally uploaded to the London Forum YouTube channel, September 2016. A third charge was added for a third song, I Like the Story as it is – SATIRE, in 2017.

I was found guilty at Westminster Magistrates Court by obscure District Judge, John Zani, of causing to be sent the first songs and of sending the third song under Section 127 of the Communications Act 2003; sentenced to 12 weeks in prison suspended for two years, an unpaid work order, 20 days ‘rehabilitation’, a 12-month ban from posting on any social media outlet, a £715 fine and a restraining order granted to my accusers, CAA director Gideon Falter and his ‘enforcer’ Steve Silverman.

It will be these first two causing to be sent convictions that will face proper scrutiny in the High Court in two week’s time: I did not upload the video myself, but simply shared a hyperlink. The CPS’s evidence for the ‘crime’ of sharing a video of my own intellectual property comes from a statement signed by Silverman, December 2016.

As indicated to the court at that time, Silverman admitted to running Twitter account @bedlamjones – now @ssilvuk – whom, along with his cohort, Steve Applebaum, I reported to Derbyshire Constabulary for stalking and harassment of me on numerous occasions. Police have ignored my reports so far, despite evidence dating back to 2015 of a course of action by both these men, causing considerable distress to myself and my family.

Above, in his witness statement submitted to the CPS, Silverman admits to running the @bedlamjones – now @ssilvuk – Twitter troll account, as confirmed in court by Silverman’s lawyer and CAA honorary patron, Jonathan Goldberg QC. Under cross examination, Silverman also confirmed that Steve Applebaum – and not Falter – is the owner of notorious CAA Twitter troll, Nemo, thereafter ‘Sicko’.

In this same witness statement, Silverman provides the original YouTube link, as well as a link to his own Google Drive uploads. Ergo, Silverman downloaded the YouTube London Forum video and then re-uploaded it himself to Google: 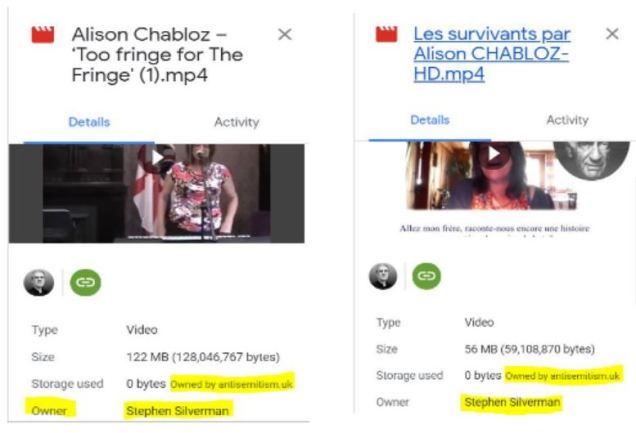 Above: screenshots of Silverman’s Google Drive links to two videos of my songs. Both videos were originally uploaded to YouTube by third parties; both third party channels have since been disabled by YouTube. N.B. Silverman unlawfully proclaims himself as ‘owner’ of my intellectual property.

Last week, I submitted a DCMA copyright takedown notice to Google: my music is after all my intellectual property and is properly licenced. Google swiftly disabled the links and, perhaps naively, I thought that would be that.

I was wrong: two days ago, I received from Google counter-claim submitted by Silverman, with predictably warped reasoning as follows:

Alison Chabloz is a virulent antisemite and Holocaust denier who is currently serving a 2-year suspended sentence, having been convicted of an antisemitic hate crime on 25 May 2018 at Westminster Magistrates’ Court in London. The conviction and sentence were upheld on appeal on 13 February 2019 at Southwark Crown Court in London. She was prosecuted and convicted under s127 Communications Act 2003 over three grossly offensive videos, two of which you have removed under the DMCA notice.

Campaign Against Antisemitism does not profit from these videos. They are used as training materials in the education on antisemitism that we provide to police forces, industry regulators and other agencies. As such, we believe the way in which we use the content constitutes fair use.

Moreover, in his counterclaim, Silverman disregards UK law on intellectual property offences relating to music, including:

It goes without saying that neither Silverman nor CAA requested authorisation to download, share or use my music. As well, how does CAA’s claim of fair use apply to the three other songs – Tell Me More Lies, Haavara and Kosher Brother –  that also appear in the London Forum video? Do CAA honorary patrons – including Lord Ahmad of Wimbledon and former Archbishop of Canterbury George Carey – approve of Silverman’s unabashed claim to ownership of my intellectual property?

Furthermore, the CAA HQ address submitted to Google in Silverman’s counterclaim – a Sephardi North London synagogue – corresponds neither to official information on the Charity Commission website, nor to a simple Google search.

As one friend notes:

How can this be used by the same organisation that was prepared to go to the ends of the earth to stop anyone from ever seeing [the videos], because they were “offended”? As I understand it the court based its judgement on songs which were deemed “offensive”, not on songs which were “antisemitic”. How will showing these songs to the police, on the pretext of “education” convince them that they are “offensive”?

Finally, if Silverman’s links to my intellectual property are reinstated by Google, then would CAA not only be liable to prosecution under UK Intellectual Property law, but also under the same law that he and Falter used in order to have me prosecuted in the first place?

Names of CAA trustees are, for some reason, hidden from public scrutiny. They, along with CAA honorary patrons, are hereby notified that if Silverman’s links are reinstated by Google and if Silverman persists in his aggressive attitude, failing thereafter to voluntarily deactivate his publicly available uploads of my intellectual property, then I shall be taking appropriate action.

13 thoughts on “CAA claims ownership of my intellectual property”