Notwithstanding my conviction for posting politically incorrect songs to the Internet, by far the toughest battle I’ve faced throughout 2018 has been an emotionally gruelling and bitter test involving individuals who are supposed to be on the same side. For the record, and in order to bring this difficult year to a close, you will find below various extracts and posts taken from monthly updates on this website.

Evidence of a conspiracy to oust me from revisionist ranks has stacked up over the course of the year, some of which is included below, along with articles touching on my trial and other general topics of interest to nationalists and those in favour of free speech. Also featured are several of my favourite writings of 2018.

Before my trial began in January, proceedings had already been punctuated with adjournments throughout 2017. Nevertheless, publicity was glorious, leading to yours truly having the honour of appearing in memes and receiving widespread support. My songs were played in court, with the prosecution’s main case against me being that reasonable members of society would find my songs ‘grossly offensive’ – an argument also reiterated on numerous occasions by my detractors within the British nationalist-revisionist “movement”.

Attacks from within began in earnest in January with an anonymous article in French – published by the now defunct UK-based Agence Bocage – a basic repetition of the prosecution’s “grossly offensive” case against me. A clean break with the traditional Bocage brand editorial line in that previous reports had stuck to facts rather than engaging in commentary (the original Bocage was run by Yvonne Schleiter, sister of the late Robert Faurisson with the new version Bocage Info now based outside the EU). The article created shock waves within the global revisionist community. It was a clear, personal attack, timed to coincide with the start of my trial and therefore the first piece of evidence of a plot having been hatched against me in the hope that I would abandon the revisionist cause.

The article below describes the first day of my trial:

Britons awake! This trial isn’t about me it’s about all of us

First published by Dr Fredrick Töben (Adelaide Institute Newsletter n° 2016, Battle of the Wills, Round 1, pp 33), February’s item is a piece I was particularly proud of at the time and remain so today. It was written shortly after Michèle Renouf gave a speech at the Dresden commemoration for victims of Allied saturation bombing during WW2. Renouf’s speech also brought a wave of good publicity for the cause, although some Germans were understandably upset that their commemoration on German soil had been halted during a speech given by an “English lady”.

Despite Renouf’s repeated refrain that she – like the Schaefer siblings, Sylvia Stolz, Ursula Haverbeck, Horst Mahler, Gerhard Ittner – now risks a spell behind bars, it appears German authorities are unwilling to charge her. My article The Gulag is No Place for Lady looks at the issues surrounding these judicial discrepancies and questions Renouf’s apparent immunity as well as her uncompromising attitude when faced with a challenge from troublemaker and relative newcomer Chabloz. The Adelaide Institute newsletter cited above includes reactions to my article from the main protagonist and in particular to a meme specially created by AmateurGraphicsAnon.

The Gulag is No Place for a Lady

With efforts on the part of my CAA accusers and from those claiming to speak for British nationalists/revisionists to silence me, the most essential aspect of this struggle has been to try and retain my sense of humour. As one staunch supporter notes:

You have humour and wit; regrettably, they have neither. Even worse, they do not understand the importance of humour – a weapon that does not require means.

Another of my favourite articles from 2018 was written just as I was about to take the stand and be cross-examined in court.:

How I managed to recruit the enemy and claim victory

Another piece originally published by Fredrick Töben (Adelaide Institute Newsletter n° 2018, Battle of the Wills, Round 2, pp 9) – in which I publicly discuss my experience of infighting for the first time, without mentioning any names. My article For the Record: Tall Poppy Syndrome and the Plight of British Nationalism suggests that the “movement” in Britain may well be in need of a purge:

Cutting down tall poppies may be one way of spoiling the chances of a nationalist revival. Indeed, certain species of weed, e.g. Japanese Knot Weed, benefit from a tenacious root system capable of decimating indigenous plant growth. If British nationalism is to make a proper come-back, then such weeds in our midst need to be eradicated. Some may display impressive blooms and evergreen foliage. But look a little closer and you will see how inflexible they are at the stem, how miserly and selective they are regards others’ growth and contribution to the cause. Most telling of all, see how quickly they wilt whenever it’s a case of publicly making statements about gas chambers used in the alleged industrialised extermination of Jews during WW2.

For the Record: Tall Poppy Syndrome and the Plight of British Nationalism

The choice of a favourite article the month of May was tricky but nevertheless fairly straightforward. Yes, I was convicted on three counts of sending/causing to be sent ‘grossly offensive’ messages to lumps of silicone (servers) in North America. After initially being threatened with an immediate spell in jail, my sentencing was then deferred for three weeks. The previous weekend, I had been the guest of Yvan Benedetti and the Parti Nationaliste Français in Paris, where I spoke and performed at the Forum de l’Europe. A wonderful experience! But my most treasured moment during May was without doubt the long-awaited publication of video footage from January 2017, filmed at the Vichy celebration in honour of Prof Faurisson’s 88th birthday:

A Song of Strategy and Other News

From that moment, internal attacks increased and grew more intense. As the French would say: Quel dommage! (in English, What a shame!). If at that point, my detractors – put to shame by the video footage – had made a discreet apology and vowed to move forward together, then British nationalism-revisionism would not be in the mess it is today. All for the Cause or the Cause for oneself?

N.B  I went to Vichy with the intention of performing my most famous song (((Survivors))). I attended rehearsals for three days and every day I practised (((Survivors))). Why would any artist suddenly decide instead to perform a song with lyrics written by a third person and then invent a story in order to “spite” a fellow revisionist about having been censored, to boot in front of an audience of 100 people? As it turns out, the only song I was permitted to sing that day was indeed a good choice: Tell Me More Lies! ~ lyrics by Gerard Menuhin.

June saw me condemned to a suspended prison sentence, struck by the proverbial big-stick of censorship, an inordinate number of hours of Community Slave Labour, “rehabilitation”, a fine, etc. I fought back and initiated appeals against both conviction and sentencing. June 8th also marked the second anniversary of (((Survivors))). Interestingly, June 8th 1967 happens to be the date of Israel’s attack on the USS Liberty. In contrast to the verdict from both the Crown and my nationalist detractors that my songs would be “grossly offensive”, the article below describes reactions from various Jewish commentators:

An article published shortly after the death of Shoah producer Claude Lanzmann provoked several headlines in the Jewish press. Those who screamed for my arrest for a breach of my Suspended Sentence Order won’t be pleased to learn that my probation officer recently informed me that police had told him they won’t be issuing a warrant because my article was not offensive! Indeed, nothing I have ever written or said in public has ever been subject to police charges. Which just goes to show how effective my songs are.

Lanzmann’s Legacy A Shower of Lies 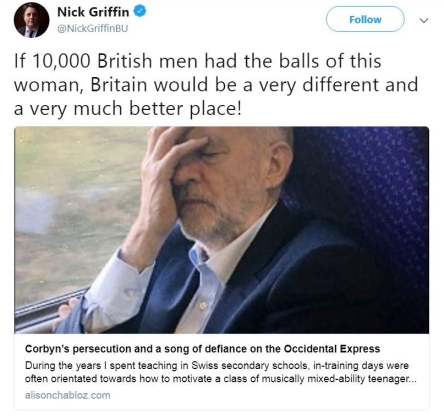 When former BNP leader Nick Griffin read the article linked below, he tweeted “If 10,000 British men had the balls of this woman, Britain would be a very different and very much better place”. I’ve never met or spoken with Mr Griffin. However, I do agree with the sentiment expressed in his tweet. The story of my glory-bound train ride to Buxton is another of this year’s favourite pieces:

A round up of my thoughts on the IHRA ‘working definition of anti-Semitism’ – a document unfit for any purpose other than buying the favours of corrupt politicians, councillors and assorted Israel-firsters:

Zionists Lack Any Sense of IHRA-ny

In revisionist circles, the month of October shall be most remembered for the death of one of revisionism’s heroes, Robert Faurisson. This was my tribute, consequently translated into French and published by long-established French journal RIVAROL.

As far as logic and the ability to self-reflect go, it seems that publicity generated after I laid a wreath on Remembrance Day at the Cenotaph in Whitehall was the catalyst for long-time fellow nationalists – two of whom I considered friends – suddenly issuing a viciously defamatory public declaration on the website of Heritage & Destiny that I would be “a traitor and a saboteur”, blaming me for the disruption of Prof Faurisson’s final conference in Shepperton and, indirectly, for his death the following day:

As the year began so it ended, with yet another court adjournment. My Appeal now postponed till February, along with a British nationalist-revisionist movement in dire need of leadership – if not a replay of Unternehmen Kolibri. My “nationalist” detractors might consider the fact that they are perhaps fortunate not to be in Latin America, where no doubt the spectacle of bodies floating downstream would be an incentive for fence-sitters to decide once and for all whether they’re actually part of a movement or merely members of social club.

Indeed, loss of moral authority can be fatal, politically speaking, as shown as by one seemingly highly frustrated, fatuous fishwife from Bristol who I shan’t name but who, for some reason, persists in sending me ‘cease and desist’ notices – which I have ignored entirely until now. When will this abusive woman cease and desist from sending me abusive cease and desist emails? Answers on a postcard please.

To end on a final, positive note, it’s a great honour to have been nominated Cultural and Artistic Liaison for the UK & Europe on behalf of the American Freedom Party. More on this soon. In the meantime, my heartfelt gratitude to everyone who has lent their support, time and effort in a bid to preserve free speech. Especially:

Merry Christmas to all.