Before detailing my recent experience of Jewish Chronicle (JC) editor Stephen Pollard’s refusal to grant my Subject Access Request (SAR), I would briefly like to return to last June and the day of my sentencing at Westminster Magistrates Court.

When I was called once more to the dock, I immediately recognised solicitor Mark Lewis, seated next to both my accusers from Campaign Against Antisemitism. I was able to quickly alert my barrister, Adrian Davies, that Lewis had sent me several death threats on Twitter, a fact which Mr Davies revealed during mitigation that same day.

During my second visit with the Probation Service in August, I produced screenshots of Lewis’ tweets along with several other examples of abuse sent to me on Twitter, abuse that is still ongoing today despite the obvious fact that I am unable to respond directly owing to my 12-month ban from social media. Shortly after my meeting with probation, Lewis’ prosecution by the Solicitors Regulatory Authority was quietly announced by the media.

Those creatures whose plaintive cries of protest provide further confirmation that Zionists lie most of time can rest assured that everything is recorded and, as with Lewis’ threats, transmitted to my probation officer in Derbyshire. More on Lewis below.

Now to Stephen Pollard and the SAR. Going back to January this year, Pollard’s reporter, Ben Weich, expressed astonishment when I informed him that his boss had recently told independent broadcaster Richie Allen that ‘denial’ of the ‘Holocaust’ should not be criminalised in the UK. Perhaps Weich’s reaction was more to do with the fact that he suspected Pollard had told Allen a deliberate lie? If not, then Weich who seems honest enough (asides his Gab/PayPal libel) might want to consult the passage below from Auschwitz survivor Primo Levi’s book Lilith (Livre de poche, p. 162):

“From all that you have just read you will be able to deduce that to lie is a sin for others and for us a virtue. (…) With the lie that is patiently learned and piously exercised, if God assists us, we will succeed in dominating this country and perhaps the world ; It can only be done because we have been able to lie better and longer than our opponents. I will not live to see it, but you will see it: it will be a new golden age, (…) while it will suffice for us to govern the state and administer public affairs, to lavish on the world the pious lies that we will have understood in the meantime how to bring to perfection.”

When Pollard asked for a ‘certified’ copy of my passport in order to comply with the SAR, I argued that his request was disproportionate and unreasonable. His reporters, in particular Ben Weich, regularly mention me in articles and contact me via my email address for comment. However, Pollard remains stubborn in his refusal to grant my request.

Last night, I was alerted to a tweet sent to Pollard by a perfidious Zionist troll account allegedly run by David Collier, close associate of pro-Israel bully Jonathan Hoffman, third ‘witness’ to my wicked crimes. Not yet having managed to silence me completely, it seems that alongside the usual labels of ‘convicted anti-Semite’, ‘neo-Nazi’, etc.,  tactics have now been augmented to include outright lies, – this time in relation to allegations made by Co-chair of Labour International, Colin O’Driscoll, regards unsavoury behaviour from Pollard in the past. The Collier/Hoffman troll claims I would be to blame for first spreading O’Driscoll’s allegations regards Pollard. Clearly another attempt to bait me into responding angrily. Desperate times make for desperate measures.

Despite Pollard’s stubborn refusal to grant my SAR, the tone of his emails has altered slightly when compared to past dealings. Previously, Pollard’s role on Twitter appeared to be that of Dog Whistler General: 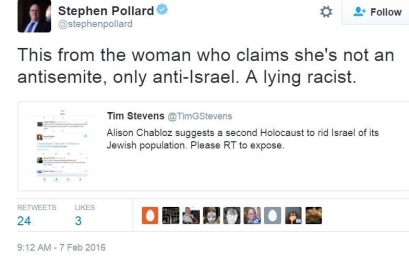 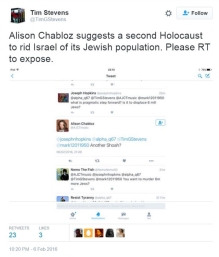 Little wonder that Pollard is loathe to deliver my SAR. Several other SARs already include correspondence from JC reporters about me dating back to 2015. Dealing with such a complex SAR is surely the task of a specially appointed Data Protection Officer? Is the JC unable to afford to employ somebody properly qualified to do the job? Why choose to rely on the editor who must already have enough on his plate as it is?

As for the portrayal of Pollard by Collier, Hoffman and others as ‘victim’ of O’Driscoll and Chabloz, this same exercise is at play when it comes to Mark Lewis: Poor Mark has done nothing wrong! He’s an angel who was simply replying to vicious haters! Etc., etc., – mostly from irrelevant extras whose names aren’t even worth a mention. (Another example of this tactic aptly labelled by Hervé Ryssen as Accusatory Inversion can be seen in US Zionist-controlled media’s current recycling into a victim of Leo Frank – paedophile-murderer of a White girl.) Those decrying Lewis’ ‘persecution’ at the hands of ‘virulent Holocaust denying anti-Semites’ should read this 2012 article by Andrew Rosthorn and ask themselves why it’s taken so long for the SRA to take action against this particular solicitor.

Both Pollard and Lewis suffer from incurable diseases. Hoffman doesn’t look like he’s in good shape either. Younger, more honest Jews should take a look at the frankly insane behaviour of these elders and perhaps also question who or what prodded David Aaronovitch to recently state the following (Jewish Chronicle, Oct 4 2018):

“The Jewish community’s stand against antisemitism has actually increased it… Loud Jews, noisy Jews, demanding Jews are not the Jews people like.”

Global control of mass media – a relatively recent phenomenon – may be the key to sustaining Zionist dominance for the time being. But in the end, historical exactitude will prevail. My abusers might note that no police charges have ever been brought against me for my writings. In contrast to my opponents’ accusatory inversions, I always remain civil and polite. The fact that they went after my humourous songs (now apparently translated into several languages including Cyrillic!) perfectly illustrates Aaronovitch’s above comment…

Hear the Jew cry out in pain as the White lady sings.