With the appointment of Tommy Robinson as unpaid adviser on grooming gangs to UKIP interim leader Gerard Batten, the party can finally promote its official standing as United Kingdom Islamophobia Party. Next, they’ll be adopting the IHRA ‘working’ definition of ‘anti-Semitism’.

Not that things were much different under Nigel Farage who yesterday, after announcing his intention to topple Batten in a vote of no confidence, stated in an interview that his greatest achievement in politics was ‘single-handedly killing off the British National Party’ (BNP). Yes, dear reader, this from the same man whose party brought about Brexit – the greatest achievement of British democracy in most voters’ lifetimes. By his own admission, Farage confirms allegiance mainly to himself, rather than to British voters.

Promotion of Farage’s UKIP by the BBC et alia certainly contributed to the demise of the BNP which, under the leadership of the much maligned Nick Griffin nevertheless became Britain’s most successful post-war racial nationalist party. Shortly after the death of Jo Cox and before the Brexit referendum, I already noted the Zionist-controlled media’s penchant for kosher nationalism. For Farage to claim victory over political rivals just shows the depths some are willing to plunder in order to assure their own glory rather than fight alongside fellow patriots.

As for Robinson’s new appointment, nationalists should take a look at three info-graphics created by Jon Swinn. Screenshots taken from his Securing Our Interests website: 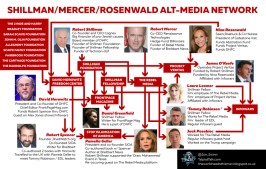 For the likes of Robinson, Batten and Farage to claim to be working in the interests of Britain and Britons is frankly a bit rich. Without doubt, all three are heavily indebted to the pro-Zionist ‘counter terrorism’ agenda with its endless cash incentives and fidelity bonuses. Hopefully it won’t be long before more people start to realise that these System stooges along with their Zionist paymasters are on the wrong side of history.

Watch how next month’s headlines will bang on about Robinson and Brexit: media spin which once again will be useful in relegating news of my Appeal to the In brief columns. Credit to UKIP’s Count Dankula though for defending my right to free speech. You won’t hear Robinson doing the same. Why not? Because he’s scared of competition and in particular the siphoning off of shekels from his nest-egg most dear, a nest feathered largely by gullible patriots who have yet to grasp the Big Picture regards Zionist control of media, finance, government and, ultimately, of White Genocide.

As for grooming gangs, will Robinson be advising Batten to look into why the CPS has failed to bring charges against two high-profile child abusers whose crimes and whose names, we are told, shall remain unknown until after their deaths? And, rather than continuing to demonise the world’s global Muslim population, will Robinson be advising Batten to go after police and social services, negligent in allowing gangs of Asians to groom young vulnerable White girls?

As for non-White mass immigration into White countries soon to become non-White, when is it going to dawn on all the Tommytards out there that Robinson works for the very sponsors of Le Grand Remplacement? How often does it need to be spelled out? At least Katie Hopkins could be on the brink of some kind of epiphany. Perhaps Batten made the wrong choice?

I think what really upsets me as well, and what no one will talk about – no one’s allowed to talk about – are the progressives within the Jewish community. Because many of the rabbis are actually huge proponents of migration into Europe, you know, they are supporters – many of the rabbis – of boats across the Med and I find that very challenging because I think bringing over a large Muslim population when those individuals are the aggressors of my Jewish friends… That’s a conflict that I never understand and will never understand.” ~ Katie Hopkins.

But first Hopkins, Batten, Farage and Robinson and you all need to read this.