Mainstream coverage of social media “offences” is highly dependent on who is the “offender” and who is the “victim”. Certain “racially-motivated” offences are hardly mentioned, whereas others earn swathes of column space and even prime-time TV coverage. Councillors and even members of the aristocracy are not spared the glare of negative publicity and my own case has generated plenty of interest. But for some reason, yesterday’s announcement by the Solicitor’s Regulatory Authority that media lawyer Mark Lewis is to be prosecuted in a disciplinary court has not been mentioned by any mainstream sources at all. *

In a statement made following yesterday’s news, Lewis said:

It is a matter of great principle that one can respond robustly to intimidating racist death threats.

After briefly following me ca. 2011/2012 on Twitter, Lewis then blocked me; thereafter unblocking me to engage in what can only be described as abusive (on his part) spats.

Lewis’ robust responses culminated in his presence in court, seated next to my CAA accusers last June for sentencing, no doubt in the hope that I would be led down to the cells and then to prison.

So, let’s take a look at some of the history which led to this week’s turning of the tables.

Lewis first abused me back in 2014 when I questioned the authenticity of a Daily Mail article about alleged “anti-Semitism”. Lewis lost the plot, resulting in two publications on the Storify platform – now defunct. Archived versions exist but are only relevant from a historical viewpoint. In short, I complained about Lewis to the SRA 19th and 27th August 2014. My complaint came to nothing. Disappointing to say the least, considering the highly abusive content and tone of Lewis’ tweets to me.

Lewis’ subfolder of screenshots is less voluminous that that belonging to Suzanne Fernandes. (I did think of using the header When Mark met Suze – perhaps for another day…)

I will include one of Lewis’ 2014 tweets – now deleted – which the SRA received as part of my complaint. Important to remember that as well as sitting next to my accusers in court last June, Lewis carried out pro-bono work not only on behalf of Fernandes, but also Ambrosine Shitrit.

Shitrit, – as well as managing to have me sacked from a cruise ship contract in 2014, then trying to have my 2015 Edinburgh Fringe show banned, –  like Fernandes, convinced police to have me arrested on trumped-up charges of harassment shortly after CAA had succeeded in banning my 2016 show. Surely no cohencidence that both women happened to be represented by Lewis?

November 2015, shortly after CAA had assigned Nemo aka Stephen Applebaum to my case, Lewis and I engaged in another spat which led to his now-famous outbursts where he wishes me dead. Twitter made him delete. For far less, I was permanently banned from Twitter only a couple of weeks before my arrests as described above.

Now, for some context. Please note my civil replies to Lewis’ abuse:

Above: rather be struck off? – If the SRA had acted three years earlier… Imagine the savings to the public purse. Risk assessment not a high priority..?

And guess who also joins in the conversation? 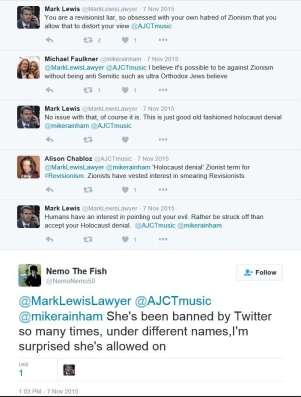 Above: my replies are civil. Nemo and Lewis are engaging not only in a Battle of Wills. This is about Truth vs Lies; about the “Holocaust” myth being set in legal concrete.

And let’s see one of Lewis’ DIE tweets in full context – part of the above same conversation:

And just so no one feels left out, here’s Adam Porte, trainee barrister and son-in-law of – wait for it! – Bedlam Jones! These Zionists do like to keep things in the family. A shame they project themselves in public as proper nasty pieces of work:

Finally, what kind of media lawyer would favourite Twitter abuse as seen below? 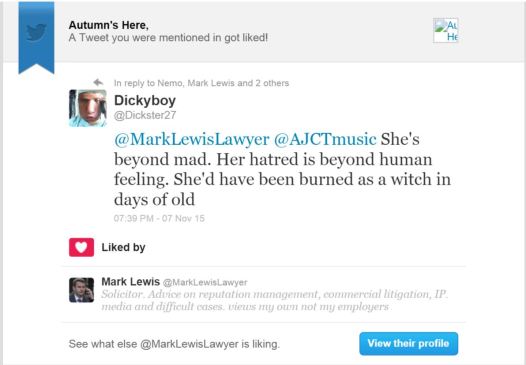 The SRA have been aware of Lewis’ social media activity for years. Why wait till now to do anything about it? Why wait till Lewis is on the point of emigrating for good – or so he claims – to Israel?

And on a personal note, what was Lewis’ precise role in my prosecution and conviction for singing songs? Police are fully aware of Lewis’ abuse of me – as saved on this laptop which was seized the day I was arrested for alleged harassment of Lewis’ clients, Suzanne Fernandes and Ambrosine Shitit. Police held on to my laptop for nigh on 12 months. Surely someone must have blown the whistle – or would that be why early retirement seems to be the choice of at least two investigating officers who have dealt with my case so far?

Lastly, why is the mainstream media so quiet about all this? What would be any journalist’s analysis of Lewis’ robust responses to my perfectly civil tweets?

I think we all know the answer… Total silence.

* The Times published an article, also yesterday, which can be viewed and commented here.