First, they came for the artists…

An article last week in the French version of the Times of Israel laments the fact that school teachers in France are experiencing increasing difficulty when trying to “educate” students on the “Holocaust”. Predictably, the finger is pointed at the French Muslim community. In order to remedy the situation, public education policy will now ensure that teachers undergo special workshops and in-training days.

My first thought when skimming through the article was French comic Dieudonné’s contribution to the Revisionist cause. The enemy, neatly assisted by the likes of ex-PM Manuel El blanco Valls, severely shot themselves in the foot trying to censor him: 8,000 people turned up at a recent show in Marseilles and the comic’s success has never been more widespread.

As I’ve often stated on radio shows and elsewhere, Dieudonné was one of my main influences. His work led me to discover and study the Revisionists’ achievements, notably those of Professor Robert Faurisson, who was invited by Dieudonné to appear on stage more than a decade ago in order to receive the Prize for Insolence and Infrequentability, presented by Dieudonné’s co-star, Jacky, dressed in a pair of striped pyjamas with distinguishing badge.

The appearance of Dieudonné and Faurisson together on stage resulted in another criminal proceeding against Dieudonné for incitement under the 1990 Gayssot Act, with the comic being found guilty. An appeal to the European Court of Human Rights invoking Article 10 and the right to freedom of expression was rejected on the grounds that such a performance amounted to a political meeting and was therefore not a theatrical comedy show…

God must have forgotten to tell Moses about The Eleventh Commandment:

The above legal case is cited in the recent ruling by District Judge John Zani who found me guilty of causing ‘gross offence’ for singing satirical songs about Jewish power and the “Holocaust”. Reiterating the sentiment of Italian Revisionist, Carlo Mattogno, any attempt by the System to further set in stone the orthodox “Holocaust” narrative “is simply an honour paid to me personally…” [Carlo Mattogno: Auschwitz: A Three-Quarter Century of Propaganda, p. 100.]

The enemy has seen the counter-productive result of censorship tactics against Dieudonné. Therefore, are we to deduce from my own case that I must be silenced at all costs, preventing my work from gaining prominence? One reasonable explanation is that my songs are simply too effective: the official “Holocaust” doctrine clobbered in just a few minutes’ worth of musical entertainment; an effective weapon of mass destruction, as proven by my recent guilty conviction for offending God’s “chosen elite”, as is the case with similar proceedings brought against Dieudonné in France.

My conviction, the first of its kind in the UK – one which the Crown Prosecution Service was initially reluctant to pursue, only changing tack after severe bouts of arm-twisting from my accusers (whose loyalty is to an illegitimate foreign state and not to Britain) – is merely another stepping stone along the way to breaking the myth of the six million. Even if I am eventually sent to prison, this will not change the fact of the matter that there simply is no evidence any such “genocide” actually took place.

The Jewish Talmud preaches that “Even the best of the ‘goyim’ should all be killed.” (Soferim 15). Our predators, assisted by controlled media, can wheel out all the weasel words they like: Neo-Nazi, anti-Semite, Holocaust denier, amateur musician, etc., etc. I’m still breathing, still writing, still composing; Dieudonné is still touring; Prof Faurisson, now 89 years old, is still making speeches; Germar Rudolf and Carlo Mattogno are still publishing Revisionist works; Mike Walsh is still putting out real news. We believe in our Cause and, in the end, that is all that matters.

Thank you for your support. 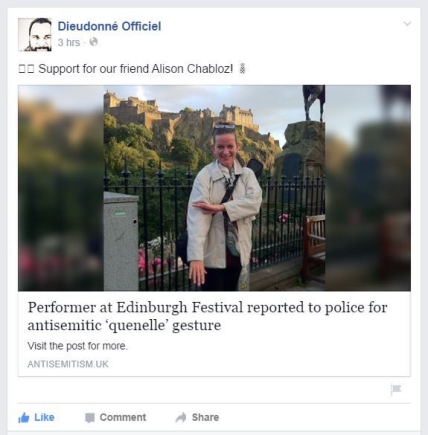