The song that made me famous – or infamous depending on how you look at it – (((Survivors))) is two years old today.

A song so effective against the Globalist agenda that I’ve now been convicted in an English court of causing ‘gross offence’ – for sharing my own work on social media.

An article today in the Evening Standard claims my song is still being uploaded to YouTube, much to the disgust of Jewish lobbying organisation, CST (- offspring of Jewish terrorist group Irgun which, in turn, led to formation of Groups 62 & 43). Irgun along with other similar terrorist groups were responsible for the deaths of countless British soldiers in Palestine during the Zionist land-grab which led to foundation of the criminal state of Israel in 1948.

A look at my YouTube Creator Studio page shows how my subscriber numbers and interactions have developed since 2015. Back then, I had less than a hundred subscribers. When I uploaded (((Survivors))), I had about 200. Two years on and despite massive censorship of my channel, that number has increased almost ten-fold. The images below taken from YouTube Video Manager show the number of views, thumbs-up, thumbs-down, as well as the number of comments (click to enlarge). 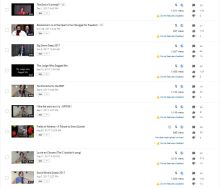 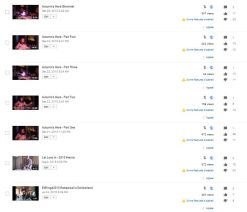 Back in 2015, my detractors were able to pull together as many thumbs-down as they seem to be able to do today. In short, negative reaction to my more recent videos is now vastly outshone by numbers of thumbs-up and indeed confirmed by the largely favourable comments (all of which are still available on my Creator Studio page, if not for live viewers due to draconian censorship of all my videos, irrespective of content).

In light of my guilty verdict, does this imply that YouTube viewers would not be reasonable members of society? YouTube is THE major video-sharing platform. The Crown prosecution barrister submitted the case that reasonable members of society would find my songs grossly offensive, upheld by the magistrate’s verdict. Can the Crown and the Judge now please explain – if my songs are indeed grossly offensive – why they receive such a favourable reaction from viewers?

The Standard article can be resumed thus: THROW THE GENTILE DOWN THE WELL! The caption under the photo describes me as a ‘Hate blogger’!

My detractors, including those from CST, may believe they possess the power and influence to censor the Internet, but they are wrong. Users can still mirror and upload both to YouTube and to alternative platforms. The Internet is a giant sieve through which information is pouring at a faster rate than ever before. The enemies of free speech are frantically trying to stop the flow, but they are few and we are many. I can’t share my own songs, but others can. My detractors can hardly complain when they themselves have done likewise.