Continuing from my previous post, as well as from the main topic of my recent videos, i.e. YouTube censorship, I feel it is necessary at this point to dwell somewhat on the double standards imposed by certain countries regards freedom of expression, especially when it comes to one particular historical event, namely, the ‘Holocaust’.

According to Wikipedia, 22 nations have laws which forbid either explicit denial of the ‘Holocaust’ or else denial of genocides in general. Although the list in part mirrors YouTube’s censored list, there are several notable exceptions: Russia, Spain, Portugal, Liechtenstein and Bosnia and Herzegovina. Why are these nations resistant to YouTube’s legal complaints? And how come Bulgaria, Croatia, Estonia and the United Kingdom figure on the list when these countries do not have any anti-revisionist laws?

In my last video, I noted that there are eight EU countries altogether which do not figure on YouTube’s most extensive list (some notifications include 19 countries, others 28, the largest number being 32). These countries are Spain, Portugal, Ireland, Denmark, Sweden, Finland, Malta and Cyprus.

Whilst Spain and Portugal both have legislation which criminalises genocide denial, the United Kingdom does not. So what is YouTube playing at?

The least surprising country on the list is, of course, Israel, where anti-revisionist law states:

A person who, in writing or by word of mouth, publishes any statement denying or diminishing the proportions of acts committed in the period of the Nazi regime, which are crimes against the Jewish people or crimes against humanity, with intent to defend the perpetrators of those acts or to express sympathy or identification with them, shall be liable to imprisonment for a term of five years.

Prohibition of publication of expression for sympathy for Nazi crimes 3. A person who, in writing or by word of mouth, publishes any statement expressing praise or sympathy for or identification with acts done in the period of the Nazi regime, which are crimes against the Jewish people or crimes against humanity, shall be liable to imprisonment for a term of five years.

Therefore, how come there is no prosecution of the Israeli producers of THE JEWS ARE COMING, a long-running satirical show aired on national Israeli TV,  and how come their videos are not banned from YouTube? How can Israeli artist Nathalie Vaxberg-Cohen get away with performance art in which she dresses and performs as ‘The Holocaust‘ at Yad Vashem and is then photographed at the Berlin Shoah memorial with her hands down her pants, whilst French dissident, Alain Soral, is dragged through the courts and so far has been made to pay more than 30,000 Euros in fines for a quenelle salute in almost the exact same spot?

It is one thing that Gentile comics in the UK, Ricky Gervais and Karl Pilkington, can offer up ‘Holocaust’ jokes and not face prosecution – at least not yet. The UK does not have any ‘Holocaust’ denial laws; but Israel does! My videos are banned and I am being prosecuted for allegedly causing gross offence!

The above raises the $6 million dollar question:

Why aren’t CAA directing outrage towards Vaxberg-Cohen? – who, incidentally, following her ‘Holocaust’ gag, went on to video herself defecating on various national flags, including her own, Why aren’t CAA or fellow Israeli charities prosecuting the producers of The Jews Are Coming?

Let me explain. Zionist supremacists in charge of CAA aren’t concerned with Gervais or Pilkington because they are both too high profile and any attack on their careers would backfire tremendously. As well, Jews cannot be seen to want to censor artists in Israel – censorship of artists in the 1930s remains one of the reasons for the justification of Israel’s existence. It just would not look good!

By attacking me, by censoring my voice, by grooming police to bring about multiple arrests and my recent incarceration, CAA hope to bring in by the back door similar legislation to that which already exists in Israel and elsewhere and thus create a legal precedent. They are not interested in so-called anti-Semitism outside these shores.

For proof of this, let’s take a look at a three tweets sent by ‘Bedlam Jones’, CAA Director of Enforcement, Stephen Silverman: 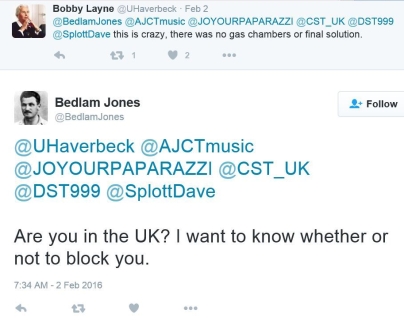 My next blog will, as promised, deal with the information and emails provided in the Freedom of Information documents I mentioned yesterday. CAA supremacists can delicately or indelicately stick their Jewish privilege where the sun has chosen not to shine, preferably whilst watching the video of  Vaxberg-Cohen’s flag poo performance art.

Kind regards to all.