*Scroll down for updates

Following your recent tweets to a representative of Tell Mama, I wrote to the gentleman concerned, asking him to forward you an email explaining my side of the situation. Seemingly, my request has been ignored and, therefore, you leave me little choice but to go public.

Since the smear campaign against me began, I have received numerous death threats – some of which came from your own ‘former’ lawyer! – had my address posted online, my career attacked and photos of my family have also been published. Police chose to ignore these and instead arrest me on spurious allegations of harassment against yourself, Ambrosine Chetrit, as well as for inciting racial hatred for my satirical songs. As you know, police have not as yet actioned any charges relating to these cases. A year on, it now seems unlikely that this will happen – this, despite your evident wish to the contrary. Indeed, at the most recent Westminster Magistrates Court hearing, my barrister told the court that we would now be starting legal action for abuse of process concerning the appalling treatment I suffered earlier this month – partly the result of original complaints brought against me BY YOU among others!

Regards your vexatious complaint, it must be noted that my blogs concerning you and Fiyaz Mughal are a record of what actually occurred. You joined the smear campaign against me and I responded. You are continuing to tweet publicly about me and, therefore, I have the right to reply.

You claim to be Christian yet your actions towards me suggest you’ve strayed from the path. All your libellous tweets have been screenshotted and archived with corresponding URLs. In all, there are more than 200 tweets from you concerning me, yet you have the gall to complain that you’re the one being harassed? Further tweets concerning me will also be recorded. Freedom of speech is for everyone, Suzanne, even for people you dislike.

This blog post will be updated if and when necessary.

It is notable that no one from the Jewish community – nor seemingly from Tell Mama – is rushing to whiteknight the Great Whiner of Ealing. Has she outrun her usefulness?

Poor Fernandes, unable to accept self-responsibility and assume the consequences of the unavoidable fact that she – and not Fiyaz Mughal – was one of those who reported me to police.

In light of my present circumstances, I have every right to monitor what is being said about me publicly on Twitter – especially by those who saw fit to try and have me prosecuted and convicted under false pretences.

I challenge Resisting Logic to provide evidence which would confirm her claim regards Mughal’s apparent support for Palestinian causes. In my view, Tell Mama would have folded long ago if Mughal had not accepted help from the Jewish Community Security Trust.

To save Mr Ali of Tell Mama the trouble of forwarding my email to Derbyshire Constabulary, I have reproduced the text below.

Wishing everyone a pleasant day.

My name is Alison Chabloz. I was notified of a spate of recent tweets about me from Suzanne Fernandes. I would be very grateful if you would communicate the following to Ms Fernandes as I do not have her email address.

I have now a spreadsheet of 200 tweets from Ms Fernandes concerning me, some of which are seriously libelous e.g. associating me with death threats and knife-wielding trolls, along with other spurious allegations of harassment against her family.

Ms Fernandes now seems to wish to apply pressure on police via Tell Mama to have my WordPress blog removed. Her malicious intent has been noted. Please see:

Is Ms Fernandes is trying to bait me into writing another blog about her which she can then report to police? Perhaps Ms Fernandes would like to arrange a joint interview at her local police station where an officer can once again clearly tell Ms Fernandes that I have certainly committed no crime against her. If a representative of Tell Mama wishes also to be present, I would see no inconvenience.

In addition to my previous email, I would like to add that one can only wonder at the lack of intellectual capacity of a person interacting publicly on Twitter with a known anti-Muslim troll account, set up specifically to target Mr Mughal and Tell Mama (hence the troll’s name: @TellDramaUK) and then sending clear evidence of this aforementioned lack of ability for critical thinking to both Tell Mama and to Derbyshire police. 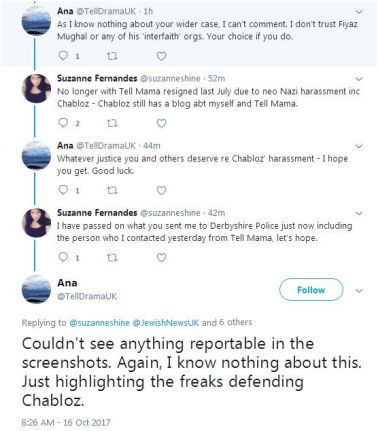