Who else but a lover of ships and sailboats would call himself Nemo?

Above: as well as a love of all things maritime, Nemo would also appear to have a penchant for Jewish terrorist organisations.

November 2015. Would Nemo’s real name be the same as cited on all court listings to date?

Around May 2016, Nemo deactivated and/or changed his Twitter name on two more sockpuppet accounts, @LittleAlex64 and @demonfightback. Both accounts were swiftly suspended, caught red-handed tweeting identical photosphopped images of yours truly.

Sicaro was suspended from Twitter, January 2017. Thereafter, we saw the arrival of @EddieLarge66 – very quickly suspended, followed by @maxwellssilver1. Both accounts gave the game away with typically unwise tweets: 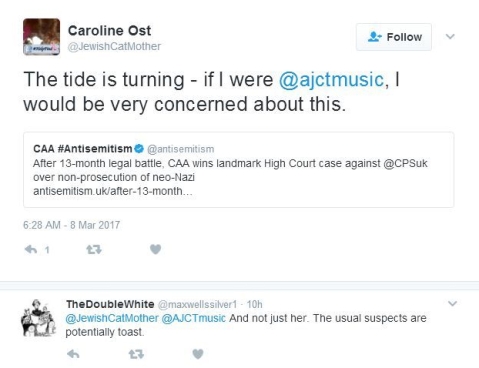 So it goes on today. Nemo’s latest sock, @Mark00427586, carries all the hallmarks of his previous incarnations:

Indeed, Nemo seems to have forgotten that he used the exact same Group 43 photo in the days when he used to call himself Nemo.

Wishing everyone a pleasant week.

5 thoughts on “A Seafarer’s Tale of Lies, Deceit and Trolling”