With just three weeks to go before my next appearance at Westminster Magistrates Court, have the authorities finally grasped the level of malice directed towards myself, my livelihood and my family?

Twice last November, I was arrested on charges of malicious communications and harassment, brought by the very same people whom I had previously reported to police for the exact same crimes committed against me. The difference being that I have lost my livelihood, have had my gigs cancelled and have been harassed in my own home with anonymous, threatening letters.

Rather than do their duty and bring the perpetrators of these crimes against me to justice, police closed their investigations and then arrested me for alleged crimes against these same perpetrators. Apologies for the bad language, but it’s fucking insane.

I was arrested for alleged harassment of Ambrosine Chetrit, the same woman who, two years previously, had signed for a recorded delivery, police-worded cease and desist letter, after she managed to have me sacked from my job with German cruise company, AIDA – a fact Chetrit recently admitted to on Twitter: 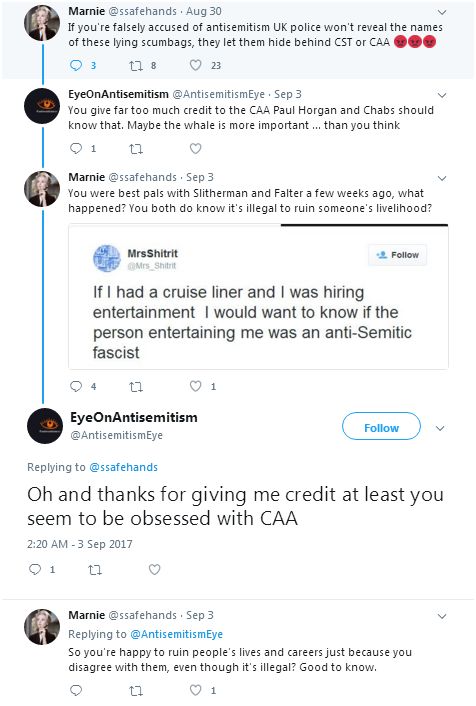 The charge of harassment brought against me by Chetrit has been dropped.

Presently, as readers will be aware, I am facing a criminal conviction for malicious communications – for two of my songs  – on evidence supplied to the Crown Prosecution Service by two men who were also previously under investigation by Derbyshire police for harassment after my 2016 Edinburgh Fringe show was pulled for political reasons.

Surely, everyone by now must have cottoned on to the fact that Gideon Falter (aka @NemoNemo50 aka @Sicaro72 aka #Sicko) and Stephen Silverman (aka @BedlamJones), should be the ones facing justice – along with Chetrit – and not me? For crying out loud, Silverman was forced to admit in open court that I was right about remarkably also correctly guessing which Twitter troll accounts he and his fellow CAA board member use!

Persecution of me by these insidious characters has led to further attacks on my career and livelihood. Recently, I was sent a screenshot (below) of a post from an Israeli Facebook account detailing the harm intended towards me by these criminals who, like Chetrit, are apparently benefiting from police protection:

Going by the name of ‘Shay Alfasi’, this spurious individual has targeted all the venues I played last year in the North West. I am also reliably informed that Alfasi has contacts within the Israeli Embassy in London. One of Alfasi’s pals even admits to group wrongdoing: 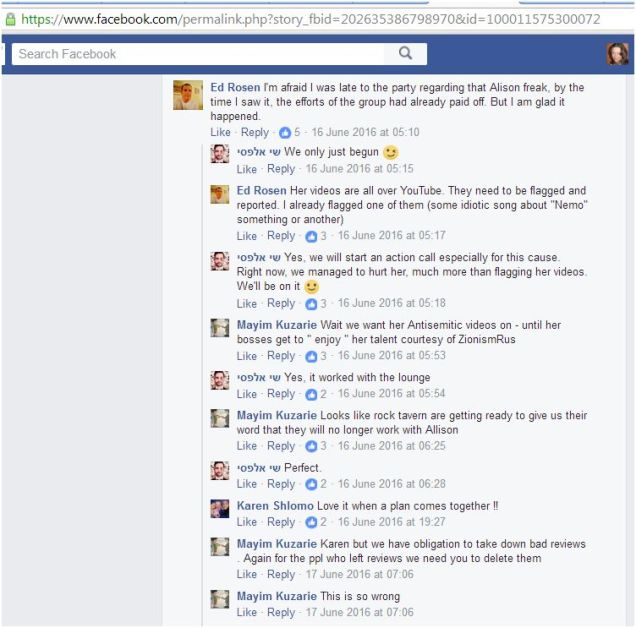 The above will fit nicely into the dossier being compiled to show further evidence of malice.

Following yet more anonymous, unwanted deliveries to my home last month, I published a blog post and then decided to upload several new song demos to YouTube. Naturellement, various censorship fanatics then took it upon themselves to lobby YouTube with the aim of limiting any revenue I might make from my music.

I am still waiting to hear from these same censorship fanatics regards whether or not they have complained to YouTube about Eminem, Ariane Grande or Jahseh Dwayne Onfroy.

But no. It seems it’s perfectly acceptable and even commendable to threaten to kill queers, sing about not being able to walk for days after being ‘f*cked so hard’ or – if the artist happens to be Black – publish a video depicting the lynching of a white child. Artists producing such provocative work are guaranteed multiple platforms for selling CDs and, indeed, with the help of the mainstream, they attract massive underage audiences, including at benefit concerts given for dead kids in huge arenas.

However, artists who ridicule an officially debunked narrative concerning atrocity propaganda (on account of which scores of people were at the time hanged), well, they will be censored by fanatics who wish to see such heretics starve to death:

Maybe if my lyrics included lines like ‘Kill all Whites’ or ‘F*ck the police’, I’d have six million YouTube subscribers by now?

I still have several songs up my sleeve but shall save these until at least after my next court hearing. On bail for almost a year thanks to now-recused pro-Israel Senior District Judge Arbuthnot (NB seven months of my bail period occurred before any charges were brought against me) my most recent upload is a parody of the famous James Bond theme The Spy Who Loved Me. Interestingly, rather than place ads – as YouTube notified me they would – my parody has been removed from view in the US for copyright reasons. The takedown was requested manually by Universal Music Publishing Group. Plenty of other cover versions exist on YouTube. Why mine has been targeted in this way is a matter of some speculation. I suspect it is simply another measure of limiting growing support, ensuring that a wider audience be prevented from discovering my work.

Such is the reach of the Israel lobby’s tentacles. Indeed, last week CAA boasted on Twitter about attending a counter-terrorism summit in Israel:

We’re at the World Summit on Counter-Terrorism discussing links between #antisemitism and #extremism, and terrorist targeting of Jews #ICT17 pic.twitter.com/YN92t6CMXz

Would CAA Director of Operations, Anthony Orkin, be the same man who, at my last hearing, was liaising with CPS counsel during the breaks?

In any case, CAA attendance at a counter-terrorism event held in Israel, of all places, would somewhat contradict Gideon Falter’s claim last year that CAA is not part of the Israel lobby.

Thank you to everyone who has donated over the past weeks. I have now set up a Hatreon account which allows people to pledge a monthly sum. Please use the invite code VPGXKNDKDUL. Even £1 is enough as it all adds up and will help me to continue to fight the good fight. My PayPal is still functioning, for the time being.

Please also consider attending the October 4th hearing at Westminster Magistrates Court, 10am, when I expect I shall be asked to enter a plea.