Since that fateful day in court last December, Jones has desperately sought ways to alleviate his discomfort. Alas, to no avail.

As I have already stated in previous blog posts, Jones’ harassment of me dates back to my quenelle salute at the Edinburgh Fringe in 2015. The same is true of his cohort Nemo. The smear campaign by these two men against me continued during the 2015 festive season, at the Edinburgh Fringe 2016 when my show was pulled for political reasons and culminated in my arrest and court hearings at the end of last year.

Jones’ downfall concerns the second hearing when I was dragged back across Britain in order to be gagged by District Judge Arbuthnot, since recused following my discovery of the judge’s jolly with the Conservative Friends of Israel. Now, to be perfectly clear, my solicitor and I had no time to prepare ourselves for this hearing and seeing as my solicitor began his two-week holiday the same day, I was represented by barrister Adrian Davies at the last minute. After almost three hours of deliberation, I was persuaded to reluctantly accept the gagging order, mainly because I had a train to catch and needed to be back up north in time for Christmas.

Jones had prepared the papers submitted to court that day – a fact made clear in the accompanying notes. His self-incriminating comment, relating to two Gab posts I made after the first hearing, states in brackets :

I cried tears of relief and happiness on my train journey home.

However, it’s doubtful that the same was true for Jones. He’d been found out, by way of his own carelessness or else that of one of his pro-bono solicitors. Either way, the CAA’s chances of winning this ‘first private prosecution of its kind in the UK’ suddenly must have looked far slimmer than they had a week earlier. Let’s take a look at how Jones had boasted and crowed: 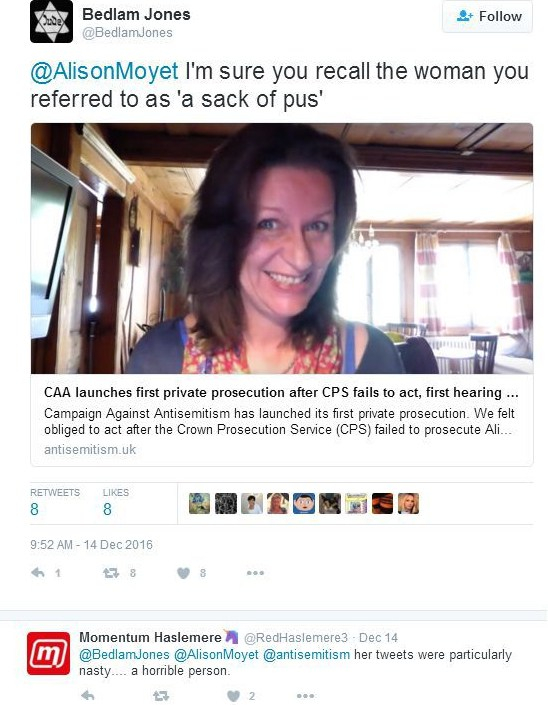 And here’s Jones with his pal Nemo on the day of my first hearing (time stamp is EST due to a logged out browser):

At the second hearing, the now-recused judge had been wont to approve my gagging order because of misleading evidence submitted by the then private prosecution. Several Facebook posts were cited, my settings clearly adjusted to friends only. Which of my Facebook friends had provided these, I wonder? Certain examples of my alleged notoriety had been photoshopped, one of which – a series of sourced quotes by prominent Jews – was described by the prosecution counsel as being a pack of outright lies. Was the magistrate a little overwhelmed at having a real-life QC in her courtroom? Indeed, she allowed the barrister to waffle on for 50 minutes as if the trial was taking place there and then.

Luckily, I did have time to point out Jones’ fatal error to Mr Davies before the hearing began and this point was duly noted by the judge. After the gagging order had been approved, Jones was obliged to clarify that Jones was indeed himself, and not Nemo aka Sicko.

Well aware that he had no other real choice, Jones’ next move was to try muddying the waters. At some point in early February after a long month of near radio silence, Jones changed his Twitter account name from @BedlamJones to @SSilvUK. This can be seen in the screenshot below which documents Jones’ failure to delete in time :

As the name @BedlamJones became available, someone quickly commandeered a spare sock and created an exact carbon copy which is still active, tweeting nothing but gobbledygook. However, this account has only existed since last September whereas Jones’ tweets under this same account name date back to 2016 and indeed – as will hopefully be shown once my seized laptop is returned if my hard disk hasn’t been wiped – to 2015: 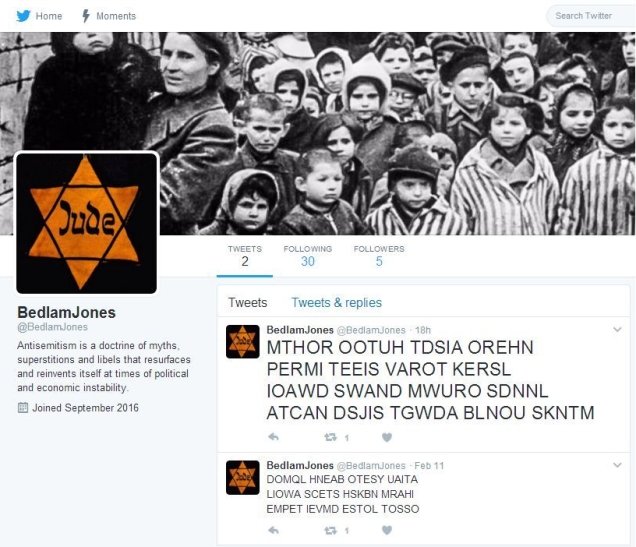 The CAA private prosecution against me was not only malicious, it was an attempt to pervert the course of justice by citing false accusations against someone who has caused no harm whatsoever to any individual, man or woman. A song is not a crime. It is these men who should be facing justice, not me, and their so-called charity needs to be wiped from the register before they cause similar harm to others.

Up until the unforced error of the second hearing, Jones’ trolling had been slightly more wily than that of Nemo: as we saw in my previous post, the latter has already been through at least eight sockpuppet accounts. Jones did his best to dissimulate his unlawful harassment and targeting of my professional and social life by regularly deleting tweets and therefore trying – unsuccessfully – to cover his tracks. In fact, since police confirmed they would be investigating his tweets after my 2016 Edinburgh show was pulled, he largely refrained from tweeting or mentioning me. By what measure, if any, was Nemo manipulated by Jones into bringing this prosecution? Not that Nemo would appear to need much persuasion. He’s been making a menace of himself since his university days. Nemo is the sort to lie about his own grandmother in court in order to serve Israel. See my previous post, Police, thieves, enemies and trolls.

If I am arrested and detained in detention for a breach of bail until my trial in July and if I am then found guilty (for posting funny songs on teh Interwebz), I will already have served most of my time. Bedlam and Nemo will have made free speech martyr of me and my CD sales will go through the roof.

In the meantime, if you click on the video below, you can hear a live version of my parody of Edith Piaf La Vie en Rose-Chosen (starts at 15’51”), performed in Alberta, Canada and accompanied on violin by my fellow revisionist Monika Schaefer. It’s surely the nicest way to end this blog – and perhaps also the most poignant way to forsake my freedom.

The same day, “Jones” must have had second thoughts and reverted back to his troll name before finally settling on @SSilvUK: