A letter published in today’s Guardian speculates on the reasons for the Crown Prosecution Service announcement on Wednesday that a man connected to the murder of PC Yvonne Fletcher outside the Libyan embassy in 1984 cannot be prosecuted for reasons of national security:

• The UK government’s case has always been that the Libyans shot dead PC Yvonne Fletcher out of pure wickedness – implausible prima facie because it would make the closure of the Libyan People’s Bureau inevitable. In fact the UK government was warned by the Libyans several times on 16 and 17 April 1984 – both in Tripoli and London – that they expected trouble involving firearms. Western intelligence knew well that the violent Libyan dissident faction it supported – Al-Burkan – had agents inside the embassy. Outside the building, Saleh Ibrahim Mabrouk uttered the last warning to police on the morning of the shooting and was promptly arrested; he was in custody when the shots were fired.

Despite the deafening warnings, the UK government took no preventive action – not even surveillance cameras were positioned – and several individuals escaped from the rear of the LPB before the lockdown began. No wonder they still want to keep it all secret under the “national security” blanket.
Dr Kevin Bannon
London

This, of course, will not be heartening news for British police officers. One sets out with noble intentions of serving Queen and country – to whom one swears an oath of allegiance – and then one is brutally assassinated. The culprit walks free, leaving friends, family more aggrieved than ever and colleagues bitterly contemplating the possibility of the same happening to them. Yet another indication of the level of decrepit corruption prevalent within our Establishment.

Crime has always existed in here in Britain, but the levels of violent crime we see today especially in inner cities are unprecedented. In London, fatal stabbings are an almost daily occurrence, mostly between black and Asian gangs, some wielding machetes. Drug dealers ply their wares in public spaces, parks and outside schools; grooming gangs prey on vulnerable girls and high-profile paedophiles conveniently die before being brought to justice, often despite evidence dating back several decades and untold numbers of victims.

Why is it that police seem less and less able to tackle these issues? Would it partly be because they’re too busy chasing dissidents for the heinous act of THOUGHT CRIME ?Does anyone really trust police these days? For sure, there are still plenty of decent officers, but whether or not such individuals will enjoy promotion would seem to depend less on their allegiance to Queen and country and more on whether they’re members of secret societies or affiliated with foreign and minority lobbying groups.

Speaking for myself, I have zero reason to trust police: I was wrongly advised in 2014 regards Ambrosine Shitrit – a fact admitted by police but for which they have never apologised.  Then, the investigation abruptly closed last year after they had confirmed they would be looking into harassment of me by my two most prolific trolls, Bedlam and Nemo, who, as we now know, are behind the Campaign Against Antisemitism (CAA) private criminal prosecution against me which sparked my arrest, as already explained in several previous blog posts.

As also previously explained, since the CPS took over the CAA’s private prosecution, I have still not been formally charged with any offence. So far, the only document I have received since my ‘trial’ was adjourned last March is a simple bail sheet with reworded bail terms stating I must not contact my accusers nor post anything ‘wholly or partly racist / anti semitic [sic] and grossly offensive.’ The three pending charges are described overleaf in this same letter as ‘cases’.

Today, the prosecution was scheduled to disclose eventual further evidence or, if necessary, request more time. There has been no notification of any decision taken in this regard. However, last night, four police officers apparently turned up at my parents’ address in Glossop asking my mother to relay a message that I should present myself at the nearest police station in relation to my Westminster magistrates case. You know, the one where I’m being hauled in front of a judge for posting humourous songs on the Internet, which no one was forced to watch.

This development is bizarre: if police wish me to attend an interview, then they have my telephone number and email address. If there is no warrant, then I am not legally obliged to attend. I shall reflect on the issue further and take a decision over the coming days.

I wonder, has someone perhaps been making allegations of contempt of court or a breach of bail terms?

Let’s have a look at some of Freebird’s previous incarnations.

Mr Fox @eddylarge66, suspended, who admits below to being @Sicaro72 : 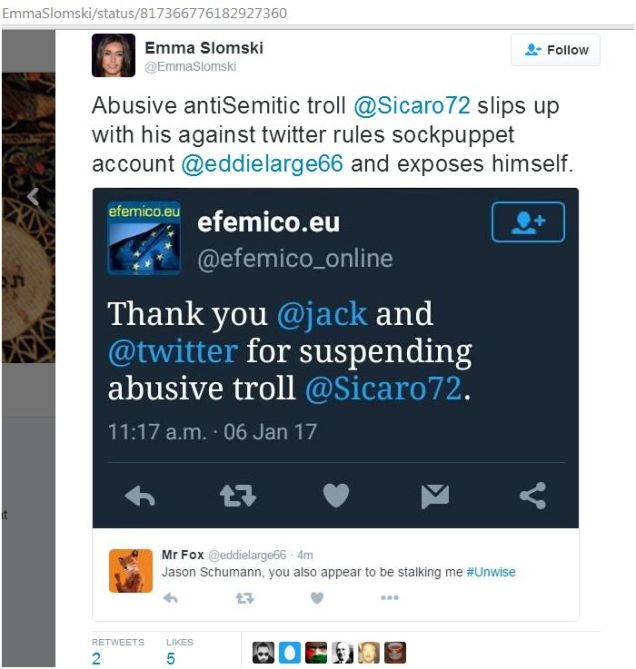 Dr Moreau @Sicaro72, also now suspended, who used his own search terms to try and smear me:

Oh Sicaro! Such a careless hitman, incapable of marking a target even with a water pistol:

The above screenshot, like the one posted in my previous blog, is particularly interesting as it echoes another letter which appeared in the Guardian last August:

And finally, here’s the infamous Nemo @NemoNemo50 – account deactivated – anti-hero of one of my songs: 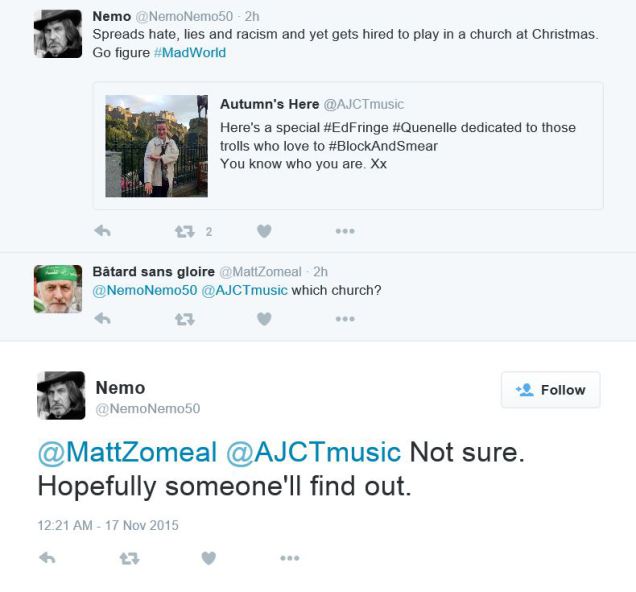 Freebird aka Sicko aka Nemo aka Eddy aka Maxwell can rest assured that plenty more screenshots exist which further expose his smear campaign against me.

In light of all the evidence, trying to charge me with contempt of court would be something of a joke. More likely, my accusers want me put in preventative detention for a breach of bail. But this, too, would be risky, especially since the recusal of the judge who imposed my original bail terms, not to mention the level of support and publicity I am receiving. However, the only certitude is that the persecution never ends – the result of having criminals in control of our country who wish to restrict what we patriots are allowed to think, say, write or even sing!

For clarity’s sake, I shall publish a separate post on Nemo’s bosom pal, Bedlam Jones and his Twittincarnations. In my view, it is necessary to upload this evidence to the Internet in order to avoid it being lost by way of another eventual seizure of my computer.

Love, peace and blessings to all.