I first became aware of the work of Tell Mama UK in 2013. Back then, with several ongoing and costly court cases (notably against The Telegraph’s Andrew Gilligan), Tell Mama’s director, Fiyaz Mughal, was understandably happy to have support from ethnic white Brits like myself. Mughal sent me a Facebook message to this effect and even used my Storify blogs as evidence of the smear campaign against his organisation. He also offered his assistance in 2014 when I was sacked from my job with AIDA cruises following a defamatory letter sent by one of Tell Mama’s principal detractors who Mughal had also threatened to sue.

Since my quenelle in Edinburgh last year, Mughal has been obliged to distance himself (although this process had begun as early as summer 2014 when he withdrew his promised support regards my professional situation). Moreover, Mughal along with another of his collaborators, Suzanne Fernandes of Ealing, have now embarked on a smear campaign against me.

On her Twitter profile, Fernandes claims to be on the advisory board of Tell Mama. Why is her name not on the official list?

According to her Twitter feed, Fernandes has reported me to police at least twice (her face is apparently a regular fixture at Ealing police station). Already last year, it would seem that Fernandes was being manipulated by my main abusers (both described as Islamophobes on Tell Mama’s blog, here and here) as seen from tweets by the troll account RTingBot, run by these same abusers : 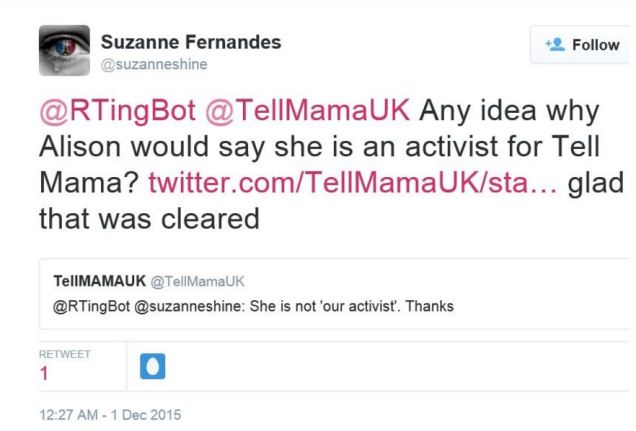 No longer an activist, no. But for two years a firm supporter as shown in over 100 blog posts by me, as well as in emails sent to me by Mughal offering his assistance when I was stranded in Germany.

Earlier this year, Fernandes took exception to my revisionist songs. Nobody was forcing her to listen but she decided I should be reported to police for my musical mischief. To boot, Fernandes then decided to tweet Zionist extremist Dave Lange (aka Israellycool) who’d written yet another hate blog about me, with copies sent to Sadiq Khan, Mayor of London and Mark Regev, Israeli ambassador to the UK asking them both to assist in putting me behind bars!

Really? An advisory board member (but not according to the official list) of a pro-Muslim organisation tweeting a hard-line, pro-Israel propagandist – not to mention the abominable Regev – in order to score a few points? Clearly upset that I had the audacity to respond, Fernandes then changed tack, deciding to lump me in together with convicted Internet troll, John Nimmo, currently in custody and awaiting trial for having sent death threats to Labour MP, Luciana Berger.

As well as all the usual labels attached to pro-Palestinian, anti-Zionist commentators, Fernandes is now claiming publicly that I have harassed her family – an outright lie – and that she has again reported me to police.

The above is a fairly typical overview of the way Lewis sometimes handles himself on Twitter. Unsurprisingly, our ‘top lawyer’ is now under investigation by the Solicitors’ Regulatory Authority.

Maybe Fernandes needs to check a few facts before engaging with such types?

Does Fiyaz Mughal also support Israel? I’ve yet to see him criticise Israel. Indeed, former CST director Richard Benson was drafted on to the board of Tell Mama to assist Mughal run his org, presumably in light of astronomical costs of the aforementioned legal cases which were threatening Tell Mama’s continued existence.

My research of Mughal revealed several further worrying factors. Mughal’s wife claims to be a survivor of the London 7/7 tube bombings and, like her husband, runs an organisation for victims. An electoral roll search brought up Mrs Mughal’s address along with four other inhabitants all with the same surname. Three of the names are as follows:

Mughal’s business credentials can also be researched on CompanyCheck.co.uk. There are two active inscriptions under the name Fiyaz Mughal. The main page details his organisations as well as property and investment companies. More interesting is Mughal’s second page, seemingly set up to divert unnecessary attention from another of his appointments? 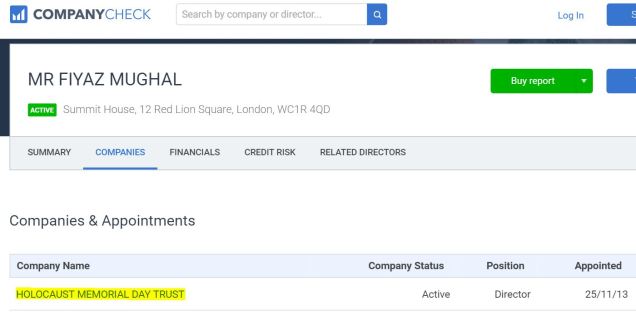 So, dear reader, there you have it. Tell Mama UK director is a Muslim who believes in and actively collaborates with holohoax fairy tales.

That Facebook message I mentioned above said something along the lines of ‘You’re amazing’.

No wonder so many British Muslims feel disappointed with Tell Mama and what it stands for.  Its association with arch-Islamophobe elements such as Harry’s Place and indeed Quilliam F does little to reassure the Muslim community. Worse still – attacks against Muslims have increased ten-fold since Tell Mama came on the scene. Are anti-hate orgs actually spreading more hate, rather than trying to combat it?

Oh, and if you’re reading this, Suzanne, my advice would be to check out what’s happening to Mark Lewis. I’m sick of your lies and smears and if you wish to carry on defaming me and accusing me of harassing your family then please rest assured that there will be further consequences.

Wishing everyone a pleasant day.