If and when universities ever offer social media studies courses, Brit tabloid zeleb Karen Danczuk would make a fascinating subject for a PhD thesis.

Ms Danczuk’s second opus published here on Tumblr selfiemadewoman​ concerns reaction to her maiden blog yesterday. In defence of an evident lack of grammatical understanding, a myriad of typos and incorrect turns of phrase, Ms Danczuk now claims to have suffered from dyslexia ( ‘’unofficially diagnosed’’ ) at school.

Ms Danczuk’s linguistic shortcomings seem to me to be largely the result of incoherence. For example :

As a kid I always struggled with reading and writing,

And in the next paragraph :

Which is it ? Struggle or joyride ?
Perhaps a journalist could find [Ms Danczuk’s former English teacher] Mr Bergin and ask for confirmation regards Ms Danczuk’s alleged dyslexia and talent for fiction? (On second thoughts, we already know about the latter…)

The point of Ms Danczuk’s latest blog is to seek pity and attention whilst painting those who disagreed with her warped reasoning on Lord Sewel and who pointed out her lack of eloquence as trolls and bullies.

Reading some of the stuff regarding a typo was baffling, when did we become a culture of attack, when did we slate others for getting off their own back and putting literature out there.  If one of my boys wrote a story and there were 20 typos I wouldn’t have ago, I would praise him for trying and encourage him more for his next story.  Does it matter if there is a typo, does it really cause so much offence?  Does it help anyone being nasty?? 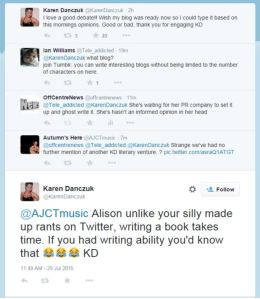 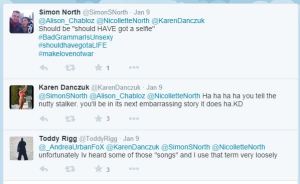 Should we feel pity ?  Taking into consideration the fact that most of our ‘newspapers’ currently publish a story a day about #KarenDanzuk ( 60k Twitter followers – that’s 50k more than her MP husband Simon Danczuk ), I don’t think we need to.

Why does our press give a voice to such people ? The simple answer: because of a pair of tits. KD fans don’t want blogs – especially not badly-written blogs. As for detractors such as myself, I say keep ‘em comin’. As far as pure entertaiment value goes they’re comedy gold.

Rehearsals for this year’s Edinburgh Fringe are well under way.  I have a 60-minute set of 13 songs written by me (lyrics and music) and seeing as this year I’ve been offered a venue with a piano, my show will include just five songs with guitar accompaniment and eight with piano.

Before rehearsals began in earnest three weeks ago I was hard at work on a cruise ship, playing and singing on average for four hours every night.  After 80 consecutive gigs without a day off, I feel very comfortable, musically speaking. It’s also nice to have taken a break from Twitter and the oft morass world of social media. Despite radio silence and an almost complete lack of commentary on my part, it’s clear that three months down the line certain users are still intent on trolling me as if their own lives depended on it… 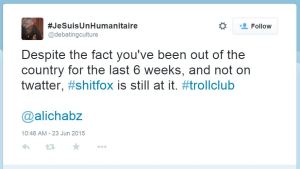 #ShitFox is a term of endearment used to describe Andrea da Silva Goncalves, the infamous Brazilian troll, resident of Tower Hamlets who lives only for Twitter.

Best ignored and left to stew in her own cess-pool of anti-Muslim abuse and mindless live-tweeting about her ‘awesome life’…  Except that today, I received yet another notification, proving Andrea’s hell-bent obsession with the lives of others i.e. me.

Andrea seemingly still hasn’t managed to soothe the immature urge to froth over the fave button. The above notification appeared during an unrelated Twitter conversation concerning non-zeleb Karen Danczuk who I’ve also written about here and elsewhere :

Karen Danczuk’s trolls are pussy cats compared to mine

Until today, Karen had never before tweeted me directly, preferring instead to instruct her now-estranged MP husband Simon Danczuk to do the bullying on her behalf and, like Andrea, childishly frothing over the fave button at every possible opportunity :

Today’s interaction was the result of Karen’s declaration about her upcoming blog.  As we’re still awaiting publication of Karen’s novel, I and others were naturally skeptical about her statement : 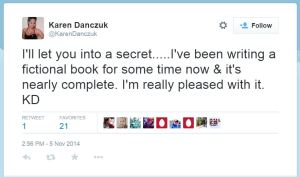 Silly made up rants on Twitter ?  Lack of writing abillity ? … Says a woman who has difficulty with 140 characters, let alone a blog !

Hey Karen, if you’re reading this and if you’re thinking of going to Edinburgh next month, then do pop into Fingers Piano Bar where I’ll be performing my one-woman show Autumn’s Here, throughout the Festival every night (except Mondays), 7.45pm.  All my own work 🙂

And – silly me, I almost forgot – perhaps Karen would like to share her opinions on my lack of writing ability with the Swiss newspaper GstaadLife which I edited for over a year. Guess what, I was paid for my articles and received a salary for editing all pieces by all contributors!

After finally engaging on Twitter, Karen decided to delete her tweet and block me. She clearly wasn’t feeling up to ” a good debate ” although, in all honesty, is Karen is up to debate of any kind unless it involves glamourous self-appraisal of HerSelfieness and any opportunity to show off some cleavage ? 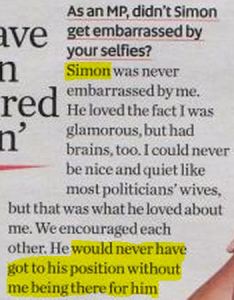 As for Andrea, she should really seek help.  For someone who constantly mocks the authorities and police concerning ‘Twitter crime’, Andrea needs to take a long look in the mirror and call it a day… 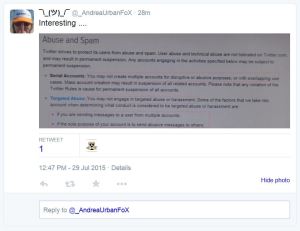 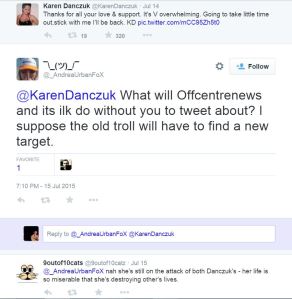