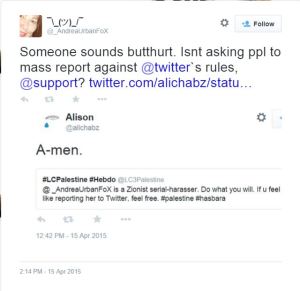 1.  Much to Andrea’s chagrin Twitter is unlikely to take any action.  It’s not as if anyone’s forcing her to read other people’s Twitter timelines.  And what’s there to stop me from similarly reporting Andrea’s plentiful tweets about me ?

2. Frenetic posting of anonymous blog posts will do nothing to prevent me doing what police advised i.e. updating them with further evidence of harassment.  Very brave and noble, isn’t it, writing blog posts anonymously in order to smear, harass and intimidate ?

3. “Owned”? – A typically juvenile response, no?  Ouch! That butthurt is really smarting today…

Just a quick update : I am extraordinarily busy, rushing round like a mad woman trying to sort out my stuff before the next exciting instalment of my life begins.

Andrea da Silva Goncalves is still up to her old tricks :  a smear a day, apparently, does not keep the doctor away and Andrea is writhing in agony with ear ache, armed with a course of antibiotics.  Ah poor dear, get well soon!

It’s uncertain whether Andrea suffers more from ear ache, being mercilessly mocked or being ignored.

After last week’s smears of me being a “rape/rape victim apologist”, this week we’re back to claims of Holocaust denial.

Andrea’s “Je suis Charlie” banner-waving seems to have died down. Her passionate defence of free speech is brought to a grinding halt as soon as heretics like myself dare to question what we’ve been taught by a corrupt and evil Establishment for the past 60 years.

Let us remember how my Grandfather died, aged 23, victim of the Nazi Luftwaffe.

Shall we also remember the 30,000 children killed in a single night during the genocidal Allied air raids in Dresden ?

In Andrea’s warped world, children killed by the Allies don’t count, rather like the Palestinian children murdered in Gaza by Israeli soldiers – these deaths would be, according to Andrea, well deserved.

Andrea only remembers similar numbers of children killed by Nazis and then applies her warped logic to reverence of Zionists and the primacy of Jewish suffering – the suffering of all suffering ?

So, carry on smearing, Andrea. Whether Andrea’s motive is driven by simple idiocy or plain hate is difficult to judge : probably a combination of the two, coupled with the lasting negative effects of hard drug use ?

And it’s not just me. Andrea’s entire host nation has to bear the brunt of her grumpy unpleasantness : 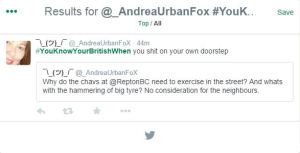 If it’s that bad, Andrea, then why not do us all a favour and feck off back to Brazil where you came from?